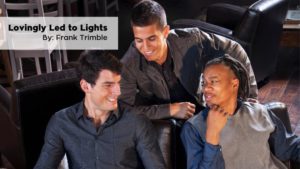 I’ve noticed over the last several years that men’s ministry has adopted a general theme of authenticity at all costs. Seems legit…right?

Before I became a Christian, using foul language was a part of my daily routine. I took great pleasure in utilizing the worst of the worst four letter words to get my point across. Man, I thought I was cool… It wasn’t until God saved me and I encountered passages like Ephesians 4 and 5 that I repented of that sin to the best of my ability. However, after years and years of foul language my fleshly tongue faces temptation regularly. I take no pleasure in cursing now, but the temptation remains at times. I have been very blessed over the years by men that have encouraged me out of the habit and showed me the greater glory of Christ and walking as He walked.

A few years ago, I was invited to go on a men’s retreat. The nature of the retreat revolved around not knowing what was coming next. Without divulging too many details, I did not know anyone in the room, and they did not know me. I was surrounded by strangers who were encouraged to be themselves at all costs. This included rejecting the felt pressure fake in your speech. Again, sounds good right? Unfortunately, this cultivated an environment of men with unbridled tongues. As soon as one of the leaders used inappropriate language, it was as if we all looked around to see if anyone else was shocked. Slowly but surely most of us began regressing to habits that belonged to our former lives. It was like digging up a grave…

Men, I’m not encouraging you to be hypocrites. Some of Jesus’ harshest words were for such as these. Instead, can you imagine being around a group of guys that authentically and imperfectly pursues a life of holiness together? This would include honesty and holding others accountable in the task of Christian growth.

Do not be yoked together with those who do not believe. For what partnership is there  between righteousness and lawlessness? Or what fellowship does light have with      darkness? 2 Corinthians 6:14

Cursing may not be an issue for you. Something else may truly give you fits. Join the club! None of us have it figured out, but you can’t fight this fight alone. There are men in your church that need community, training, and encouragement in the same way that you do. If you don’t have an active gathering of men in your church, God may be calling you to be the catalyst for change. No matter what, be an advocate of guiding others to the light of the freedom that Christ provides. I believe that Jesus is better than anything…even a popularized version of authenticity as a primary motivator.

Finally, your family sees your authentic self. They know exactly who you are. While this may stress you out, think of what could happen if the people in your home begin to see you change because of the power of the Holy Spirit. If your family is used to seeing you speak with a golden tongue at church and a serpent’s tongue at home, how powerful of a testimony would they have when they see that the Holy Spirit led you to repentance in the name of Jesus! God is in the changing business, and He uses other believers to help us through the process of Christian growth. Authenticity is popular, and in some ways I’m happy about that. However, humanistic authenticity will never cover the sin that Jesus died for.